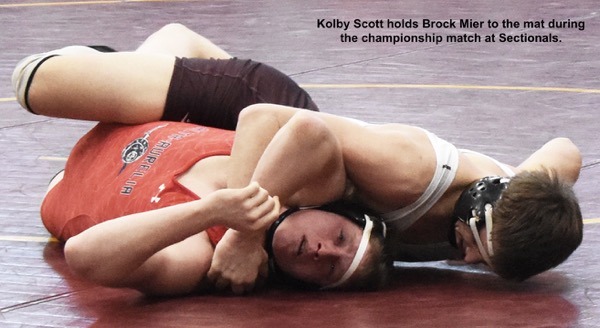 It was like dejavu of sorts for Kolby Scott. While the location was different and the outcome was different, Scott found himself on the wrestling matt wrestling the same person he wrestled a week earlier. The result between the two was the same, but this time, instead of earning advancement to the district wrestling meet, Kolby earned advancement to the state wrestling meet.
"There is not a whole lot to say about Kolby Scott that his actions don't already exemplify," commented Head Coach Steven Schaffer. "He is constantly striving to better himself in the off-season and during season. He goes out for every sport he can, dedicates himself to the weight room, and does not get himself into trouble."
"I've worked really hard this year and am excited to get back to the well," confirmed Kolby. "Hard work pays off."
Schaffer added that Kolby has only had 2 losses at the 170-pound weight class, both coming to wrestlers ranked in the top 3, one from Iowa and the other from Nebraska. In fact, he has not lost to anyone this year who isn't currently going to be wrestling at their respective state tournaments.
Kolby's trek to State began on February 6th at Sectionals. There he beat Brock Mier from Alta-Aurelia in the championship which sent Kolby to the Districts. Mier also advanced to Districts. They were held this past Saturday in Guthrie Center.
This past Saturday started off well for Kolby. He pinned Christian Nolte from AC/GC to send him to the championships. The top two wrestlers would earn a trip to State. Kolby and Blake McAlister from South Central Calhoun shook hands before wrestling in the championship in the 170 pound weight class. Unfortunately, Kolby was pinned, giving McAlister a trip to State and Scott a trip one more time to the mat that afternoon to determine the second place winner. This is where dejavu struck. Kolby found himself against Brock Mier from Alta-Aurelia, the wrestler he defeated a week earlier to advance to Districts. The results were nearly the same with Scott winning with a major decision. This win keeps the sophomore's wrestler season going for another week.
"Kolby is the most coachable kid I have ever gotten to coach and it shows," added Schaffer. "When we need to fix something he listens and adjusts, this is his second straight trip to the state tournament and it is well deserved!"
Kolby's first match in Des Moines will be Thursday at 9:00 a.m. The brackets can be found in this issue.
Kolby is the son of Jenny and Brian Scott of Mapleton.

Over the last couple years the Danbury City Council has been trying to update their book of ordinances. Simmering-Cory had been hired to do the job and were going gung ho on the project, but things slowed down last year.
The council was finally able to begin reading the ordinances in January. There are a number of changes as the Iowa Code has changed since the last time the code book had been updated and the city uses the Iowa Code for a number of their own ordinances. Thus, they are reading and adopting a few a month.
At the council meeting on Tuesday, February 9th, the council held the second reading and waived the third reading pertaining to dogs, cats and therapy pets. The ordinance now states that all animals which go outside need to be licensed. The license can be picked up and paid for at City Hall.
The purpose of the license is to help identify animals which are running the streets and visiting other residents so that they can be returned to their owners or the owner can be contacted to pick up their animal at the Humane Society for frequent violators.
The ordinances, those which have already been adopted and those which will be, are available at City Hall and on the city hall website (www.danbury-ia.com and click on the City Hall link) to view.

Friday is the first Friday of Lent which means the first fish fry of Lent. St. John's United Methodist Church will be holding their annual fish fry at the Mapleton Community Center. Please plan on joining them, but don't plan on staying!
This year's event will be drive thru. The line for pick up will move east to west on Main Street between 5:00 and 7:00. The cost for the meal is $10.
Delivery is available in Mapleton.
See the ad in this week's Review for more information.

The Iowa Newspaper Association held their virtual awards banquet on February 11th. Approximately 3,000 entries in dozens of categories were judged by class, based on circulation. Lynn Buth, editor, reporter, photographer, etc. of The Danbury Review earned three awards in the Class I group - Weeklies with circulation of 910 and under.
Buth took first in Best News Photo. The first place photo she calls "Gabby and her Cowies." The photo was taken to go with a story about the excessive heat and how farmers were keeping their animals safe. The cattle began walking away from the photo shoot when Gabby joined them in the lot, but when Lynn put her camera up, the cattle all turned around and began walking towards Gabby like they wanted to be in the photo.

Buth also took second place in Best News Photo. She called that photo "Color Walk." The Danbury Park Improvement held a color walk. The photo showed pink powder coating a couple of the participants.
Her final award was third place in the Master Columnist category. She entered three of her "Adventures With Lynnie" columns. Her columns featured an homage to her dad when he passed away, her adventure trying to drive up a steep unplowed gravel road and failing, and about the teachers' parade held after the schools were forced to close.

Many people are familiar with the image of a heart attack sufferer clutching his or her chest or feeling surprising, tingling sensations in his or her left arm. While those symptoms are common, heart

Well, this isn't a normal Adventure with Lynnie. I know there hasn't been one for awhile. Sadly (or happily), I haven't had space to write one. Well, this week I'm making sure I get this in because it pertains to the awards from the

Have you ever heard of diamond art; or you have heard of it and want to give it a try? Here is your chance to try it out at the Mapleton Library. Each registrant will receive a small item to complete and be entered into a drawing for

The Mapleton Starspinners 4-H Club held their (split) monthly meeting on Saturday, January 2, 2021 at the Community Center. Roll call was answered by members from the question, "Name your favorite winter pastime"

The annual Director's meeting of the Western Iowa Research Farm Association (located east of Castana) has been postponed from the normally scheduled date in late February. This decision was made

One hundred and twelve years ago a majestic school building suffered the rapture of a fire caused by lightning.
St. Patrick's Academy was built in 1908.

It's a ways out, but with the cold temps, perhaps it's time to do some spring cleaning. That spring cleaning could include planning what items need to be removed from your premises.
The city of Danbury

Log in to read more
No account yet? Subscribers to the print edition of The Danbury Review are automatically eligible for a free account. Register and your account will be activated as soon as your information is verified.

Register for your account online and we will activate it as soon as payment is received.